Cryptocurrencies have made some major headlines recently thanks to their soaring values. Although digital currencies like bitcoin have been around for over a decade, the general public have only begun to take note of its massive potential over the past few years — and those taking note includes celebrities too.

Many stars have unsurprisingly turned to different forms of cryptocurrency as a new way to expand their business ventures and invest their money. And when it comes to selling their own products and merchandise, a few are even accepting cryptocurrencies as payment. With so many opportunities, these celebs believe that cryptocurrencies are the future and want their fans to get involved too!

Read on to see what celebs are getting involved with cryptocurrency…

Gwyneth Paltrow is a big proponent of cryptocurrency and actually served as an advisor for cryptocurrency wallet and exchange service Abra when they were featured on “Planet of the Apps.” Of Gwyneth’s involvement in the company, CEO Bill Barhydt says she’s been a huge asset.

“She has been a huge value add. She’s opened up her network to us, given us valuable business advice, her insights on running a consumer business with hundreds of thousands of paying customers,” Bill told Forbes.

Ashton Kutcher has long been an early investor in digital products and services and cryptocurrencies are no exception. While Ashton was interested in buying into bitcoin over a decade ago, his wife Mila Kunnis admitted she was skeptical about the opportunity because the Federal Deposit Insurance Corp didn’t insure it. Thankfully, Ashton decided to invest despite Mila’s concerns.

“He sat me down and was like, ‘Hey, babe, I got to explain this thing to you. Tell me if I’m crazy.’ And I was like, ‘Cool. What is it, babe?’ He’s like, ‘There’s this thing, it’s like mining for money. It’s called cryptocurrency, and there’s this company’ — this is eight-plus years ago — he’s like, ‘It’s called Bitcoin’…And I was like, ‘Well, I think this is a horrible idea. And he went, ‘Cool, we’re investing in it.’ So he didn’t listen to me. I mean, this happens all the time,” Mila said on “The Late Show With Stephen Colbert.”

One Redditor Explains Why the GameStop Rebellion Is So Personal

While Katy Perry hasn’t gotten into the specifics of her involvement in the crypto market, she has made it clear that she’s definitely interested in the digital currency. Back in 2017, Katy met with Warren Buffett and said that she asked him his thoughts on cryptocurrency. The following year, Katy even paid tribute to her favorite currencies with some very detailed nail art.

Paris Hilton has been interested in cryptocurrency for several years after learning about the topic while having dinner with some Ethereum founders back in 2016. Not only does she believe cryptocurrencies are “definitely the future,” she’s also extremely passionate about NFTs. She released her first NFT for charity in 2020 and this year, she shared her latest NFT drop in collaboration with artist Blake Kathryn.

“I think NFTs are the future because it gives power back to the creators. And they make it much easier, and less intimidating, for the everyday collector. It’s going to disrupt traditional spaces in art, music and collectibles. I love that with NFTs and the rise of digital art, talented creators have a greater likelihood of being discovered, because it gets rid of the gatekeepers, whether it’s the art gallery or record label. It gives the creator better economics. We’re definitely living in the golden age of the creator, so I can’t wait to see what the future holds,” Paris told coindesk.

Celebrities Who Believe in Aliens And The Extraterrestrial

Back in 2014, 50 Cent partnered with bitcoin payment service BitPay to accept the cryptocurrency in exchange for his album “Animal Ambition.” He was one of the first musicians to do so and thanks to bitcoin’s value skyrocketing over the past few years, his decision has now made him a bitcoin millionaire. At the time, 50 Cent said that he decided to accept the cryptocurrency because he was trying to keep up with changing technology.

“Stay with times. Technology is what’s changing the business gotta get with it. I take money no matter if it’s coins or dollars,” he wrote in a Reddit AMA.

Madonna first got involved in cryptocurrency during a fundraising event for her charity Raising Malawi, which cares for children living at the Home of Hope orphanage in Malawi. She teamed up with cryptocurrency payments company Ripple for the online fundraiser, as they pledged to match all donations made through the drive.

In 2018, Johnny Depp partnered up with TaTaTu, a cryptocurrency-centric social entertainment platform run by entrepreneur Andrea Iervolino. As part of the deal, Johnny signed on to develop and produce film and digital content with the company. The following year, they released “Waiting for the Barbarians” produced through both TaTaTu and Johnny’s Infinitum Nihil production banner.

“In this era of democratized entertainment, I admire the imaginative ethos of Andrea and look forward to collaborating together in a liberating, progressive manner that will benefit the principals of our respective entities,” Johnny said in a statement.

Former Spice Girl Mel B became one of the first British artists to accept bitcoin as payment for her music. Back in 2014, she reportedly partnered with CloudHashing to allow fans to purchase her Christmas single using the cryptocurrency

“I love how new technology makes our lives easier, and to me that’s exciting. Bitcoin unites my fans around the world using one currency,” Mel said on her website at the time.

13 Actors Whose Real Children Have Been Their Co-Stars

Maisie Williams began her crypto journey in 2020 but gathered advice from fans before making any investments. After asking if she should “go long on Bitcoin” in a poll, she received over 900,000 responses and Elon Musk even weighed in on the matter! Despite a majority of fans telling her not to hold, she made her own decision.

“Thank you for the advice, I bought some anyway,” Maisie later tweeted.

Kanye West has expressed that he’s a big believer in Bitcoin and often speaks with friends and experts about crypto. He even noted that he believes the currency will be the way of the future.

“These guys really have a perspective on what the true liberation of America and humanity will be…A lot of the tech guys, but specifically [Bitcoin] guys were able to use the new highways, the new information highways, and create the next frontier of our existence,” Kanye said on “The Joe Rogan Experience.”

Sun Jul 4 , 2021
A video clip that has surfaced on the online displays a lioness pushing her cubs into the waterhole for a tub. Shared by Indian Forest Company officer Susanta Nanda on March 24, the online video exhibits two cubs consuming from a water gap as the lioness arrived at the location. […] 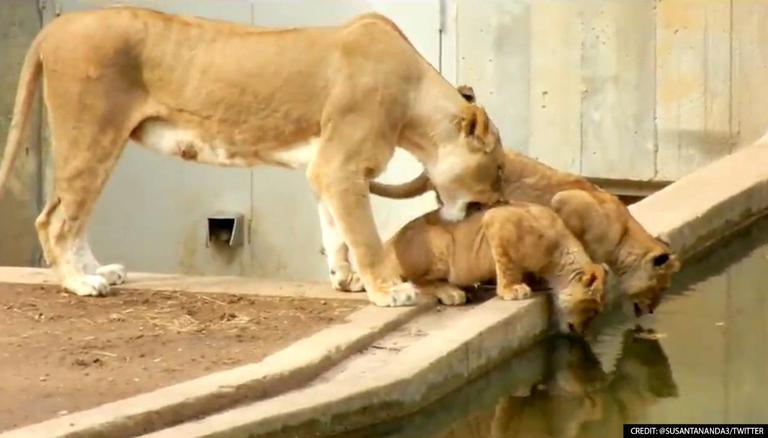